Sona Jobarteh is the first female Kora virtuoso to come from a prestigious West African Griot family. Breaking away from tradition, she is a modern day pioneer in an ancient, male-dominated hereditary tradition that has been exclusively handed down from father to son for the past seven centuries.

Rooted in the Gambia (although her grandfather originated from Mali), UK-born Jobarteh is a vocalist, multi-instrumentalist (Kora, guitar, Cello, Piano, Harpsichord), teacher, producer and composer (including for films) as well as an actress, with a family of celebrated griots and Master Kora players (she is the granddaughter of Master Griot Amadu Bansang Jobarteh, cousin of Toumani Diabate and sister of Tunde Jegede). She benefits from this classical West African music training as well as a Western classical music training from the Royal College of Music and the Purcell School of Music where she studied composition.

Jobarteh has performed around the world including in Vienna, at the London’s Jazz Café (she was 4!), at the Barbican in London, Womad and Festival Internacional Cervantino in Mexico and further. She has supported the likes of Cassandra Wilson and has also featured on Damon Albarn’s Mali Music Project which was later performed for Jools Holland.

As a performing musician she has collaborated internationally with various musicians including Oumou Sangaré, Cleveland Watkiss, the Irish Chamber Orchestra (featuring Evelyn Glennie), Toumani Diabaté, Kasse Made Diabaté, the BBC Symphony Orchestra, the Royal Philharmonic Orchestra, Britten Sinfonia, Milton Keynes City Orchestra, the Viva Chamber Orchestra, Tunde Jegede (she composed two pieces on his albums Malian Royal Court Music and Lamentations, one of which also featured on the album Trans Planet Vol. 5), and spoken-word artist HKB FiNN (as an instrumentalist, co-writer, singer and producer). Jobarteh is a regular member of her brother’s African Classical Music Ensemble, which has toured England, Ireland, Africa and parts of the Caribbean.

She has her own band,  made up of members Kari Bannermann on electric guitar, Kyazi Lugangira on acoustic guitar, Mamadou Sarr on African percussion, Alexander Boateng on drums and Andi McLean on the bass. 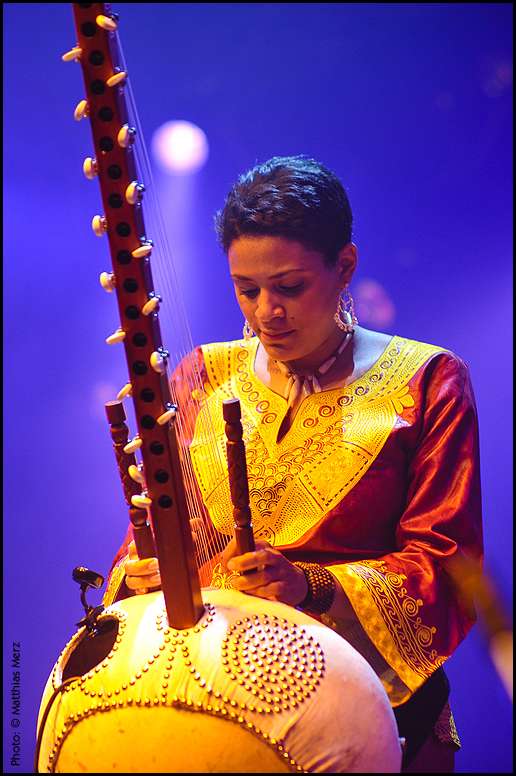 Her work is noted for its mixed influences of West African tradition, Acoustic, Soul and other elements of modern music and her own personal touch which is to reinvent traditional music rather than fuse it with modern. This shows in her studio releases but also as a film composer, scoring the classical-West-African soundtrack of the Africa documentary film “Motherland” (Motherland: The Score – African Guild Records, 2010), where she demonstrated an original use of the West African Griot instruments not just to adapt to the visual but to create a new perspective of the tradition fusing beautifully with the old. She has also provided vocals in films e.g. in the 2013 Mandela: Long Walk to Freedom film, played the Kora in movie soundtracks e.g. in 2009 Broken Embraces as well as been the sound editor like in the 2007 documentary Our Story Our Voice, acted (2006 short movie The Idea). Her IMDB profile referenced below has a full and up-to-date list of her cinematic contributions.

For more on this virtuoso, see http://www.sonajobarteh.com/