Song arrangement is getting so complex and instrumentation so international that it is most of the time difficult to recognise how much Africa has influenced popular music through its rhythms, its styles, its instruments. These are 20 African Music Instruments that are increasingly used and popular in sounds around the world. 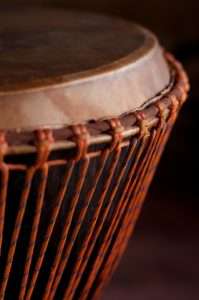 This African music instrument originates from West Africa, most likely the region of Mali and Guinea. The Djembe is a hand-held drum played with bare hands. It is up to 3 feet tall and the playing head is 14 inches across. The shell is made of a hard wood and the shaved skin is stretched over the head of the drum with the use of metal chord and rings. Read more about the Djembe here.

This African music instrument originates from West Africa. The Kora is a string instrument often likened in that sense to a harp. The total number of strings differs between regions going sometimes to 21 or 24. The Kora is built from a huge calabash cut in half and covered with cow skin. As a littlle treat, let’s here a little Jali Nyonkoling Kuyateh playing the kora

African music favours beats and thereby drums and percussions. Of all these percussive instruments, the shakers are among the easiest to master. They let you express the beat within. This African music instrument adds the spice to African music. It is made from dried gourd with woven beads.

The Sanza is usually used in Western culture.

Back to percussive instruments with the rhythm gourd. This is a percussion instrument that is made of Cowrie shells.

Rattles are an African music instrument commonly used during sacred ceremonies. This is one of the reasons why it plays a vital role in African religions.

It is made of solid wood with skin heads that produce traditional sound.

Just like rattles, bells is also used during ceremonial or ritual functions.

It is considered as two tone wooden whistle.

The Nyanga Pan Pipes hails from Mozambique. This African music instrument is a set of four instruments from. The music played in this instrument is challenging and exciting that usually involves singing and blowing of rhythmic patterns.

The scale of the Xhosa Uhadi bows is made harmonic series that results from overtones of two notes that are played on single string. This African music instrument will encourage you to explore new horizons.

Kudu horns are made of a set of six horns that represent cross pollination of musical traditions. The sound is mellow and warm that will lend a heraldic and unique African accent.

This African music instrument is played in the Greater of Central Africa. It features a strong wooden echoing box that creates unique notes.

The dundun is also called the talking drum and often seen as the musical instrument of the higher people. Learn more about the Dundun music instrument and hear it here.

The kalimba appears on different continent with various names and features.

People of Africa mainly use the balafon as a form of communication. It does not make the instrument less of a percussive music instrument.

The name of this percussion instrument derives from language of the tribe from which it originates. Udu means pottery.

It is a hand drum that is covered in Kudu hide.

We must end with the percussive instrument of course. And for that, we chose the Boba. The Boba is the richest and lowest sounding drum in Africa.

Unsurprisingly, there are many, many more African music instruments than the ones listed here. A few more of the many more examples of percussive instruments include the Yoruba bata drum or the Senegalese bougarabou drum. There are also many wind instruments such as the Ghana atenteben and more.

We use cookies to ensure that we give you the best experience on our website. If you continue to use this site we will assume that you are happy with it.OkNo